Home LIFESTYLE What Does Smh Mean? 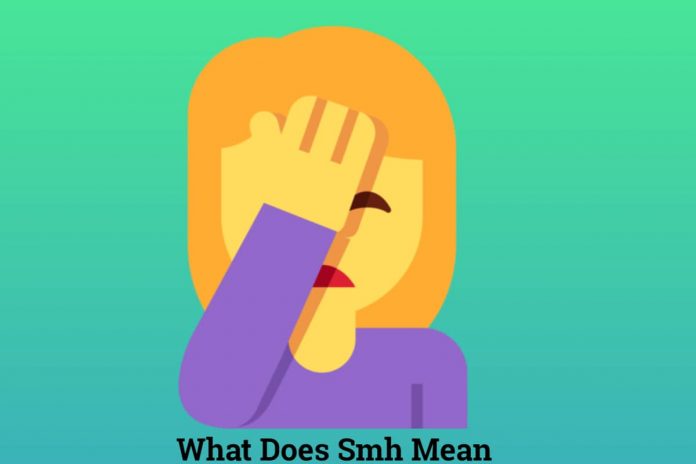 What Does Smh Mean – a brief history

When you go on the Internet, as sure as you are to find cat videos, social media posts about people’s foods, and illegal downloads (naughty!), you will also find yourself met with a lot of snarky or otherwise mocking individuals.

The Internet is full of them – the abundance of anonymity and the general inability for people to be taken to task have led to people being more willing to go the distance with rudeness. A big part of this movement involves acronyms meant to express a person’s feelings and reactions to things while using a certain degree of brevity.

Many older Internet acronyms are a lot more recognizable, even if some might not understand them immediately. Examples of these common Internet acronyms include lol (“laughing out loud”), imo (“in my opinion”), wtf (“what the fuck”), and other examples.

As the Internet grew, so too did the terminology grow. In time, we gained several new acronyms, and to help you understand what they mean, we’ll look at them one-by-one. In particular, the Internet acronym “smh.”

What does the abbreviation smh mean?

To put it simply, smh stands for “shaking my head.” People commonly use it to display disappointment or shock in other people’s actions or behaviors and tend to be used in such a way as to shame the target of the “smh.” However, despite the actual meaning of the acronym, a common misconception is that it stands for “so much hate.”

The reason why this happens is due to a combination of the inherent difficulty some people have in interpreting the meaning of acronyms on their faces. The other reason why it’s so common is that “shaking my head” and “so much hate” are phrases that can apply to the same situation, as they are both intended to be derisive towards people and ideas that are perceived as ignorant, foolish, or wrong.

As discussed earlier, a big thing when communicating on the Internet is brevity. Brevity is a word that means “concise and exact use of words in writing or speech.” People want to share their points quickly and easily. To pursue this desire, people began to abbreviate their words more and more.

Instead of saying “haha,” they say “lol.” Instead of saying “never mind,” they say “nm.” This also applies to why emoticons (text-based representations of things such as smiles, frowns, etc.) came into widespread use for people on the Internet. It was a heck of a lot easier to type than it was to order “that makes me happy.”

Even more so than before, brevity is essential for people on the Internet – and now people who are just on their phone – to try and utilize. Text messaging often limits the number of characters (i.e., numbers, letters, and symbols) that you can fit into a message, while Twitter gives you a solid limit of 140 characters.

You have to convey your thoughts with only 140 characters there, but if you want more people to see it, you have to add hashtags (i.e., #Obama or #cooking), which further limits the message you can communicate. So if you are trying to make sure that your online comments can fit the text field, it helps to use these kinds of acronyms.

For example, it might feel more respectable and uplifting to communicate your disdain for someone’s comment on Twitter, but if you find yourself too limited by the text limit, you can substitute it with “smh.”

What does smh mean in text messaging

Of course, smh is not only something that exists on the Internet – it’s a ubiquitous acronym for use in standard text messaging, especially by kids and teenagers. The question “what does smh mean in text language” is generally the same as what it means anywhere else, mainly because there is a lot of crossover between text messaging and Internet posting.

While most acronyms you will find are generally used to convey as small a message as possible into a conversation, they can sometimes carry harmful and potentially hurtful weight. Smh is a pretty good example of an acronym that exists primarily to deride, dismiss, abuse, or harass, with little in the way of an avenue for people to retort these kinds of comments.

Also Read: What is TBH?

This is mainly because the words often have so little substance that the target of the acronym cannot specifically themselves target a view of the person and can only criticize the instigation and incivility – which in turn may create further attention by potential harassers and abusers. When used on a more personal level, it is not common to see it used in this manner.

When used among friends (such as with text messaging), Smh is usually – at worst – a sarcastic knock between them. However, when used by strangers on the Internet, it tends to have less of a constructive or friendly tone.

Language is an exciting thing, allowing us to grow and adapt to situations as we see fit. While some view the use – or perhaps overuse – of acronyms as a demonstration of “kids these days” being less intelligent, on the contrary – studies show that kids who text are better at reading!

Just because they do it in a rather unconventional manner shouldn’t mean that they are any less intelligent for doing so! Whether they’re using it to respond to the latest head-shaking headline, or if they’re reading their friends’ recent stupid tweet or Facebook post, smh is going to be employed for quite a while yet. That is until we find yet another acronym to fill in for it!

Explore More About Mumbai and Kolkata