Home Technology What is TBH? 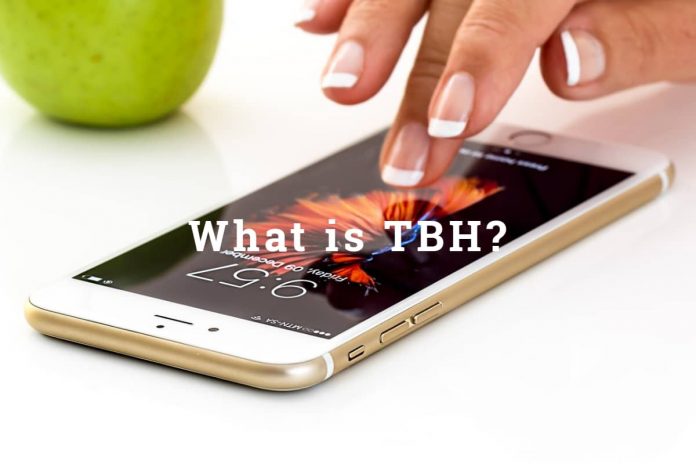 As a parent, holding valuable conversations with your children may be difficult with all the slang and acronyms they use each day.

You may even view it as a different language because there is just too many meanings for one word or phrase.

Fortunately, deciphering what your children are saying isn’t too challenging. This article will unpack the acronym TBH so that you can remain informed and hold a conversation with your children.

What Does TBH Mean?

TBH is an acronym. TBH means to be honest for most teens. It is a way of talking to their friends without using words. It saves them time, exerts less energy when typing, and looks cool when using acronyms instead of words. TBH is often used when chatting online, through text, and in online forums.

For many teens, what TBH stands for is the truth. They use this acronym as a warning, of sorts. They let their friends know in text, social media sites, and forums that what they are about to say is their truth.

This acronym is akin to the phrase “to tell you the truth,” which is what past generations used to share what they thought was the truth.

What Does TBH Mean in Text?

In-text TBH’s meaning is, to be honest, shortened for texting language. When teens use TBH in the text, they are simply shortening the word and using the acronym. Many acronyms used in texts reduce the number of keystrokes used by the individual sending the message. This allows them to send messages quickly.

One caveat exists when using TBH in text, senders must know their audience. If the person receiving the message does not know what TBH means, they will not understand it.

This is one of the reasons parents have a difficult time communicating with their children because they do not know the meaning of the acronyms or the phrases their children use daily.

If you have received a message with TBH, or any other acronym, ask for clarification before expressing your opinion to understand the acronym meaning acronym’s meaning.

What Does TBH Mean on FB?

On Facebook and other social sites, TBH has a double meaning. It still means “to be honest,” but it is used as a game. The game’s premise is to get an honest opinion from the person who posts TBH as their status update.

People will like the posts to play the game, which lets the game initiator know that you are willing to play. Once they receive alike, they will post their honest opinion about the person who gave them alike.

As a parent concerned about bullying on social sites, you should be mindful of your children playing this game. Often, the game can be a way for other children to express derogatory opinions of their friends and peers in a social setting for others to see, which can be considered bullying.

Instagram is a picture-centric social media site, so TBH means “Throwback Thursday,” in addition to “to be honest” on Instagram. Throwback Thursday is not a game but a way to share old pictures with followers on the site.

Twitter is a social site that allows people to acquire followers based on common interests, much like other sites. However, Twitter uses hashtags more frequently than other sites. A hashtag is the term used to refer to the pound sign on your keyboard or telephone keypad.

By adding a hashtag to the acronym TBH, everyone can link to the hashtag to determine what others are talking about when referring to TBH.

Many people use the hashtag as a game to speak their opinion about something that is trending or share a picture that they have posted on Instagram for Throwback Thursday. There are no rules for using TBH on Twitter.

What Is TBH on KIK?

KIK is a free chat site that many people with smartphones use to contact people around the world. KIK is popular because no one has to share their phone number to talk; they can share their user name.

Much like Twitter, TBH is used to share opinions and pictures on KIK. As a parent, you should ensure that their friends and strangers aren’t victimizing your child through the use of this acronym.

teens download to chat with others across the world. Within the app, your children can upload pictures and get feedback from strangers.

Many boast that the app developers have created a friendly community where teens can get compliments about their pictures and enjoy a friendly atmosphere.

Still, as a parent, you must be aware that there is a possibility that this app may expose your child to bullying by others within the community.

TBH started as an acronym for “to be honest” but has expanded beyond the original meaning depending on where you see the acronym. On Facebook, it is a game; on Instagram, it is a way to share old pictures, and it is also an app that allows your teens to talk to people across the world.

Also Read: What Does Smh Mean?

When you know more about how your child uses acronyms such as TBH, you can have a better conversation with your children because you will know what they are referring to when they speak to you. This will allow you to protect your children from individuals who are using the games, hashtags, and apps negatively.

The Need for Web Analytics – Part 2